Established in 1956 in Apartheid South Africa, the first official Miss South Africa pageant was only open to “white” (Caucasian) females and was organized to send a representative to London for the Miss World pageant. That year Norma Vorster was crowned Miss South Africa. Two years later, an 18-year-old secretary from Durban, Penny Coelen, was crowned and would later go on to make history and win Miss World. It was not until 1977 that all persons of all races were allowed to compete in the Miss SA competition. Prior to that, people of colour competed in the Miss Africa South pageant, which was renamed Miss Black South Africa in 1977.

This was just the beginning for the Miss South Africa organisation; of the 60 women who have worn the crown, only the last 27 winners have been chosen from the entire population of South Africa and not just white individuals. Since then, hundreds of young women have entered the pageant vying for the title.

Prior to 1998, South Africa’s representatives at Miss Universe qualified via other national pageants.

Three Miss South Africas, namely Rolene Strauss, Anneline Kriel and Penelope Coelen, have won the Miss World titles in 2014, 1974 and 1958 respectively. Three women from South Africa have won the title of Miss Universe – Margaret Gardiner in 1978, Demi-Leigh Nel-Peters in 2017 and Zozibini Tunzi in 2019. 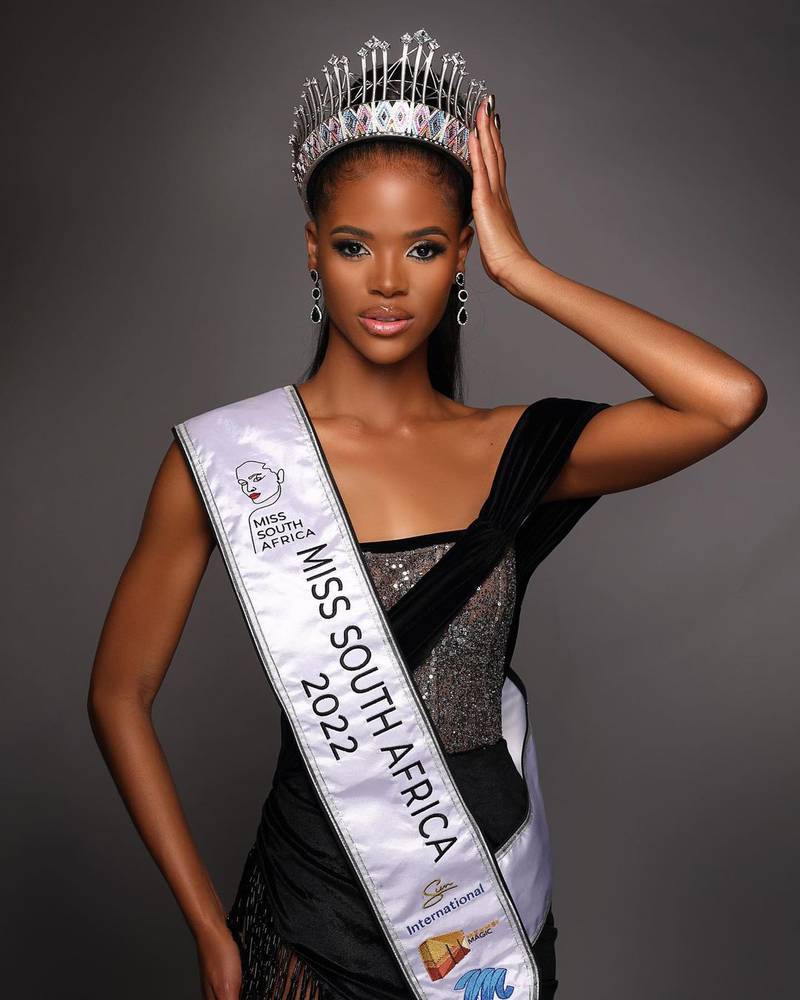 There’s still one Orange to root for — The Daily Orange! Donate today and help us win College Media Madness.

Two years after Syracuse University’s African Student Union organized the first Miss Africa pageant, Whitney Sossou was faced with the decision of whether or not to revitalize the competition from its COVID-19 hiatus. Although Sossou, the current president of ASU, had no previous experience of planning pageants, a former ASU president encouraged her to go through with putting the show on.

Sossou said that the Miss Africa pageant was a way for students to connect to African culture as part of ASU’s broader goal.

“We are here to show the diversity and cultures that the African continent carries, as well as providing a safe community for the Africans that are on campus by providing events that make them feel at home,” Sossou said.

The pageant, held on Thursday in Goldstein Auditorium, featured three contestants, with Mané Thiane and Khadidiatou Faye representing Senegal and Mariama Barry representing Guinea. Each contestant displayed their national pride and discussed their personal aspirations in the pageant through the career, talent and question-and-answer sections. The pageant also included several musical and dance performances from SU students and other well-known artists, including DJ Buka and Connell Thompson.

The pageant opened with a performance from the SU’s Outlaws Dance Troupe. The pageant also featured a dance performance by the dance group L’Union D’Afrique from Morgan State University, which offered to perform for free after seeing ASU’s other events on social media.

DJ Buka, an artist based in New York City, provided music throughout the night alongside MC Muna, who came from SUNY Geneseo.

Judging the contestants was a panel of women, who all had personal involvement with ASU. Christabel Sheldon, the faculty adviser for ASU and director of the McNair Scholars Program at SU, was accompanied by SU alumni Nneka Akukwe and Chinelo Onyekwere.
Sheldon led the question-and-answer section for the contestants, which focused on topics such as social media, education, race, women’s empowerment and the African community at SU.

SU sophomores Shakira Santos and Ajak Afet sang a duet cover of the song “Stand by Me” before the final question-and-answer section. Both had performed separately at other ASU events prior to the Miss Africa pageant.

“I thought that their voices would work so well together, so I called them both and they worked on that duet,” Sossou said.

During the career and talent sections, each contestant had the opportunity to showcase their personal goals and interests in a creative way. Barry, a sophomore information management and technology major from Harlem, gave a TED Talk about tech security.

Miss African Pageant : THE TROPICS :palm_tree::hibiscus::mango:
Doors open at 7:30pm tonight :fire: show starts at 8:15pm :smiling_face_with_3_hearts:
Tickets :
– Link is in our bio
– If you having difficulty getting tickets please DM us :speech_balloon:

A photo posted by su_asu

“I thought it would be boring for the crowd because I’m an IT major, but then we spoke about doing a TED Talk speech,” Barry said. “And that was kind of scary for me because public speaking is hard for me, so doing a TED Talk brought me out of my comfort zone.”

She followed her speech with an exhibition of clothes that she designed and sewed herself to connect to her personal interests and talents in fashion. 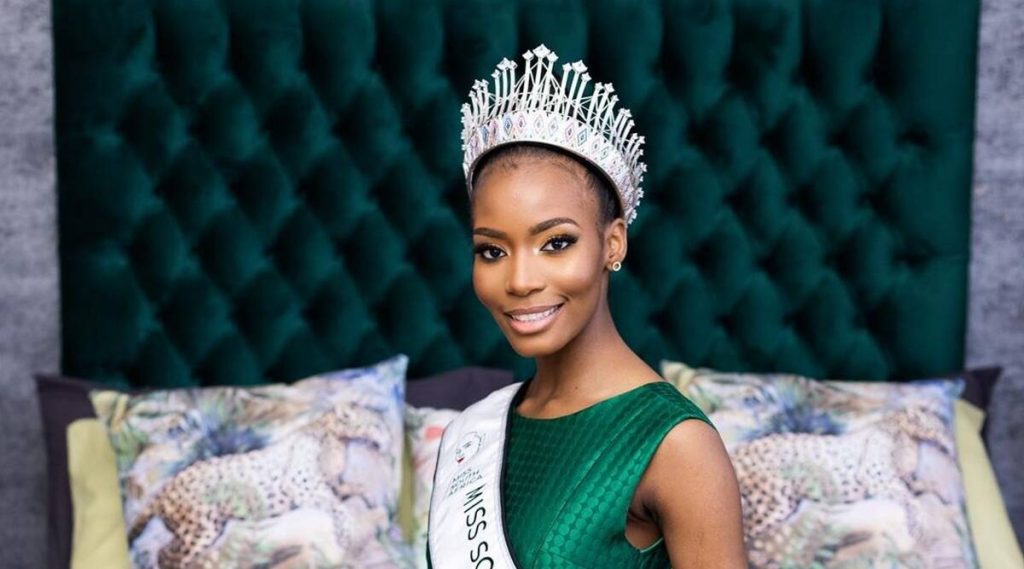 The process of preparing for the pageant took significant time commitment from the contestants and their assigned “pageant moms,” who helped them practice and develop their skills. Ifechukwu Uche-Onyilofor, another SU student, was sophomore Thiane’s mentor.

“She was my mentor throughout. She helped me with my questions; we put my career together; she scheduled my practices — she was basically the one setting up my pageant experience,” Thiane said.

Thiane, who has previously been involved with ASU fashion shows and the SU ONEWORLD dance group, decided to compete to put herself out of her comfort zone. She felt that the process taught her more about herself and built up her confidence toward reaching her goals.
Before the announcement of the Miss Africa winner, Thompson, a saxophonist, played a set of covers of pop songs. Thompson is known for his work collaborating with African musician Burna Boy and performing covers of songs by Fireboy DML and Wizkid.

Faye was ultimately crowned Miss Africa 2022. Faye, who grew up in the Bronx, is a sophomore studying international relations. During her time in the competition, she spoke about her career goal of becoming an ambassador to her home country Senegal and shared a poetry piece about her experience as an African woman.

Faye said she worked toward her career goals before the show as part of the preparation process with Sossou, who put her in contact with the chief adviser to the president of Togo. “It wasn’t just about looking nice and having fun, but actually making real connections that I can use for my actual career later in life,” Faye said.

The goal of the pageant was to show the cultures of Africa in order to help African students at SU feel welcomed and also eradicate stereotypes about Africa, Sossou said.

“In the media, everyone sees the bad sides of Africa — the poverty — nobody sees how rich Africa is, nobody sees the nice things to do, the luxury, so we’re trying to make people proud of where they come from,” Sossou said. “So that’s also one of the main reasons because the three girls that we had are very proud of being from Senegal and Guinea and they want to show it, so it was very much a display of culture as well as a fun event.”