Miss Supranational is an annual international female beauty pageant, started in 2009, and with most contests held in Poland and a parallel male contest, Mister Supranational, began in 2016, also in Poland.

The current owners of Miss and Mister Supranational are World Beauty Association S.A. and Nowa Scena with president is its founder Gerhard Parzutka Von Lipinsky as president of the production company Nowa Scena.

The current pageant title holders are Lalela Mswane of South Africa and Luis Daniel Gálvez of Cuba, who were elected respectively on July 15 and 16 in Małopolska, Poland.

Parzutka von Lipinski has been referred to as the President of Miss Supranational since at least 2017.

The Miss Supranational contests began in 2009 and were held in Poland except 2013 which was in Minsk, Belarus, and 2016, which was co-hosted with Poprad, Slovakia. Mister Supranational also began in 2016, in Krynica-Zdrój, Poland.

The World Beauty Association, based in Hong Kong, organized a rival Miss Supranational 2014 pageant in India which could not be held in person due to responses to the West African Ebola virus epidemic. It crowned one candidate, Jennifer Poleo of Venezuela, remotely, and without runners-up, and did not hold any subsequent contests. 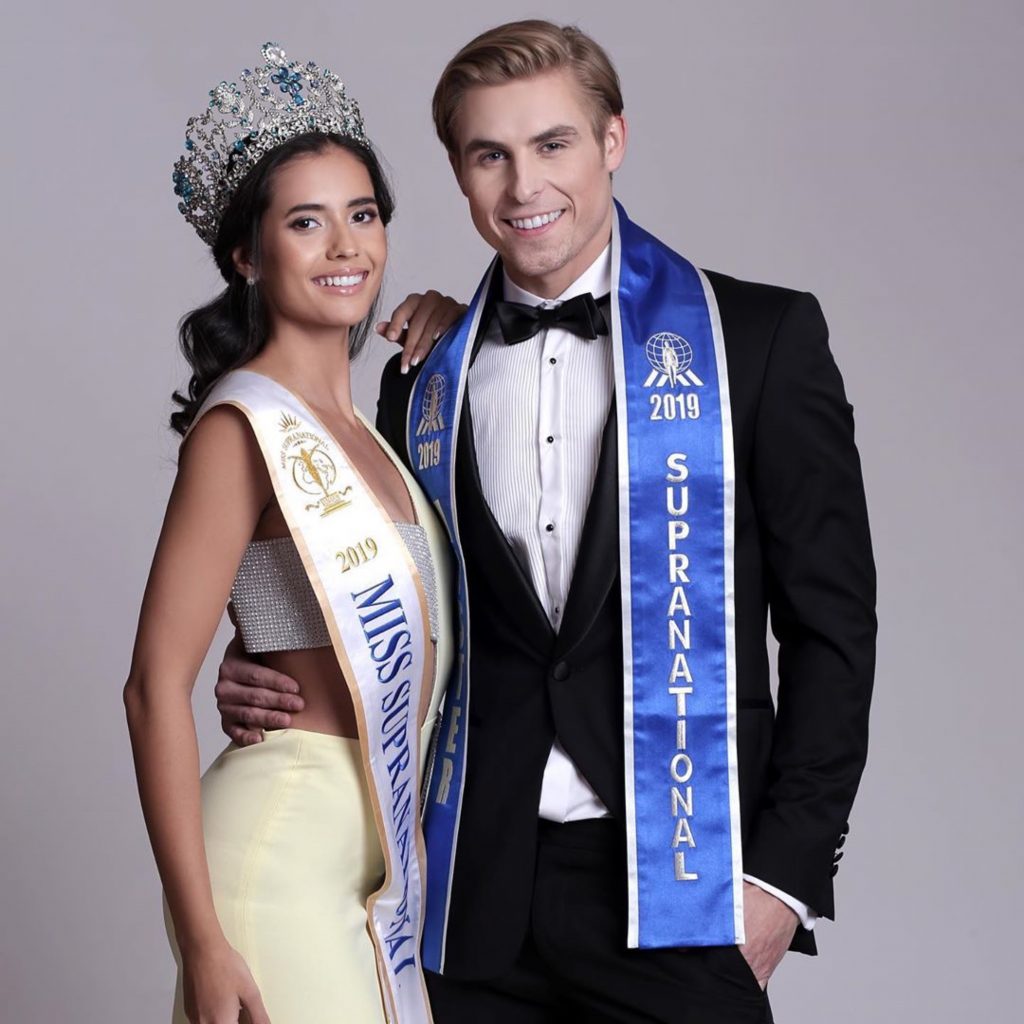 White and Blue Crown (2009–2021) – This crown was designed by the renowned jeweler and crown maker, George Wittels from Venezuela. It is made on a fine silver base bordered by numerous white crystals, diamonds and soft blue sapphires, at an approximate cost of US$300,000 make it a piece of great value. Miss Supranational’s crown from its first edition until today. In today it is still the same design, however, over the years it has undergone several modifications but without losing its original design. Among the most significant characteristics is its symmetrical shape finely framed at the focal and central point of the piece, a sapphire flower crowned, by a white diamond. The White and Blue crown will cease its use in 2022 and will last be worn by Chanique Rabe from Namibia, who won in 2021.
The Supranational Crown (2022–present) –This crown was designed by well-known Venezuelan jeweler and crown maker Ricardo Patraca. The second-ever Miss Supranational crown since its infamous first Blue and White crown from 2009, was unveiled during the 13th Miss Supranational competition.

In 2016, the Polish businessman, producer, and international director of Miss Supranational Gerardo Von Lipinsky, founded the international male beauty contest, Mister Supranational, together with the Panamanian businesswoman Marcela Lobón, creator of WBA (World Beauty Association). The first edition of the contest was held on December 2, 2016 at the Municipal Sports and Recreation Center (MOSIR), in the city of Krynica-Zdrój, Poland, with the participation of 36 candidates from various countries around the world, with Diego Garcy from Mexico, the first winner of the contest.

Approximately 80 countries have participated in the contest, making it one of the most important male beauty pageants in the world.

During a Covid-19 pandemic in 2020, Supra Star Search was introduced on 19 October 2020 as a virtual competition for men and women who want to compete for the Miss or Mister Supranational titles in countries with no national organizations.

The first season of the Supra Star Search casting was opened on 4 November 2020. The winner of the contest will win the right to compete in Miss or Mister Supranational 2021 held at Nowy Sącz, Poland on 21 and 22 August 2021 respectively. Nyisha Tilus of Bahamas and Santosh Upadhyaya of Nepal were both announced as Miss and Mister Supra Star Search 2020.

Port Harcourt, Nigeria
Verified
Miss Africa United Pageant is an annual contest that is set to unite all the 54 African countries in the African continent. It comprises of 54 African ladies from each country to come showcase and represent their cultural heritage on a platter of gold in a free and fair pageant contest. so therefore we came up with this year’s edition theme titled; SAY NO XENOPHOBIA.

Besides modelling, the ten-year-old dynamo participates in gymnastics, netball, drama, and hip-hop dance.

Read: Limpopo orphan raised by her grandmother tells us about being crowned Miss Mashau

Her mom, Tidimalo Tlhabi, says that when her daughter was young, she would always cry for her older sister’s modelling dresses and wanted to look like a princess, just like her big sister.

Although Tlhabi could have guessed at the time that little Reatlegile would end up doing modelling, she had no idea that she would win international titles such as this one, one day.

“When my name was called, I was in disbelief and extremely happy at the same time, as the competition was tough,” Reatlegile shared in her local paper, Krugersdorp News, after her win.

“I had the pleasure of learning about other African countries’ various cultures, and I have made many new friends from around Africa,” she added.

“Uganda is a very hot country, and the food is very different from ours. Interestingly, their food is largely organic, and they barely import any foods. The driving there is not like in South Africa,” she said.

Tlhabi says that she cannot wait to start using her title as Mini Miss Africa to make a difference in Africa. During the pageant, she was also crowned Miss Popularity, since she received 2500 votes online as the people’s favourite princess.

Little Mr and Miss Africa will be hosted in South Africa next year, and Tlhabi says that she can’t wait to show off South Africa to the rest of Africa when the time comes.

Share your stories and questions with us via email at [email protected] Anonymous contributions are welcome.

For a weekly wrap of our latest parenting news and advice sign up to our free Friday Parent24 newsletter.