Clad in sleek red gowns and wreathed in smiles, the models lined up in Bangui stadium for the capital’s first Miss Central African Republic beauty pageant for three years-all thanks to Russia. In a country mired in conflict and poverty, the flash of cameras capturing the moment a young woman was crowned the nation’s glamour queen was a moment to savor. But for Western observers, the contest also marked the latest subtle shift in a regional power dynamic.

In their eyes, Russia’s funding of the event signaled a bid to boost its clout in the former French colony, deploying people-pleasing “soft power” as well as military aid. In the capital’s crumbling 20,000-seat main stadium at the weekend, about 100 people-mostly state officials and the families of contestants-watched the women parade in high heels alongside Russian flags adorning the venue’s walls. Lobaye Invest, a diamond mining firm reputedly close to the Kremlin, featured prominently on the billboards of event sponsors. “To our dear friends from Russia, we wish to thank you from the bottom of our hearts for the support you are bringing to every level of our society,” said the show’s top producer, Lea Floride Mokodopo, who then gave a warm welcome to Elmira Abdrazakova, Miss Russia 2013.

Russia’s influence in CAR has been growing ever since the UN-backed government last year called for help to fight militias rampaging through the country. Since then, Moscow has supplied weapons, military officers, 170 military “trainers” and a security advisor to work with President Faustin-Archange Touadera-a significant deployment to a country historically linked to France and which already has EU and UN aid. 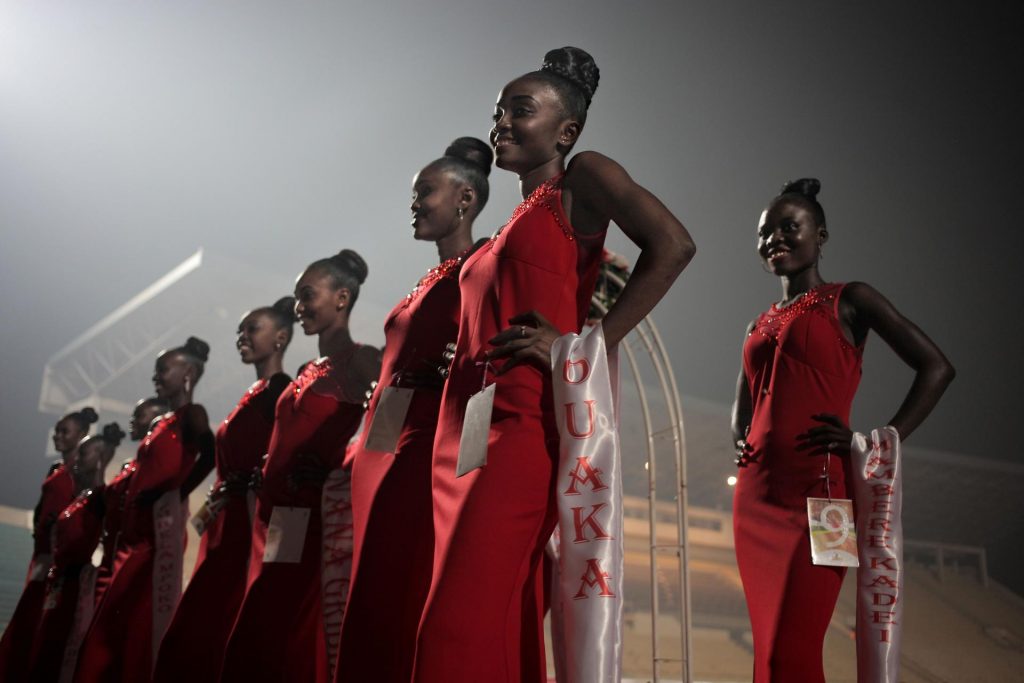 The military trainers sent by Russia are mercenaries with close ties to Russian mining companies and the numbers deployed could be significantly higher, according to Western sources. At the contest, Miss Russia 2013 presented a cheque for five million CFA francs ($8,650, 7,600 euros) to support a local health center and made a speech referencing Russia’s political push in the CAR. “The recently signed Khartoum declaration is a pledge of peace,” Abdrazakova said. Initiated by Russia in August, the “declaration” came after Russia and Sudan hosted talks in the Sudanese capital Khartoum with some of CAR’s rival militias.
The talks took place separately from an African Union initiative, with both attempting to convince CAR’s rival groups to end the violence that spiraled after the 2013 overthrow of longtime leader Francois Bozize. Most of the country is controlled by armed groups, many of which claim to protect Christian or Muslim communities, and which often fight over resources including gold, copper, iron ore and uranium.

In a sign of Western wariness towards Russia’s actions, France’s Armed Forces Minister Florence Parly on Tuesday emphasized the importance of countries working with the African Union in CAR. “The positive contribution by a number of countries, including Russia, should be in line with the African initiative for peace supported by the AU,” she said. Parly was in Bangui for ceremonies in which France handed over 1,400 Kalashnikov assault rifles and three amphibious vehicles to CAR’s poorly-equipped army.

The French-supplied weapons follow 1,700 Kalashnikovs provided by Russia in January. Both shipments have been approved by a UN panel that issues exemptions to a global arms embargo against the CAR. Russia has dismissed concerns about its role in the CAR. On November 15, Russian Deputy Ambassador Dmitry Polyanski told France to put aside “parochial national interests” and acknowledge that Moscow is “helping the CAR”.
As 23-year-old student Charlene Sombo was crowned “Miss Centrafrique” after midnight on Sunday, the speeches thanking Russia’s help could be heard on radios broadcasting across the capital. Through simple goodwill or part of a broader initiative for prestige and influence, Russia this year also staged a “Cup of Hope” football tournament and organized a drawing and poetry competition for local children. The prize: A trip to Russia, and the chance to stay in a former holiday camp for Communist youth.-AFP

A 19-year-old student has been crowned Miss Venezuela, becoming the first winner of the annual pageant since it opted not to publish contestants’ waist, hip and bust measurements. Thalia Olvino prevailed in Caracas on Thursday after organizers-facing criticism for the contest’s primary focus on physical appearance-said they wanted to push back against stereotypes about what an ideal woman looks like. “I did this with all my heart and total dedication,” Olvino said after the pageant-during which contestants paraded on stage in swimsuits nevertheless. In the past presenters would tell the audience the exact size of each contestant, many of whom underwent cosmetic surgery and followed strict diets to achieve the supposedly ideal physique: a 90-centimeter (36- inch) bust, 60-centimeter waist and 90-centimeter hips.

But this year organizers tried to shift the focus, quizzing the contestants about their character. “Determination”, “excellence” and “initiative,” marketing student Olvino replied when asked to highlight her main qualities. In another round, fellow candidate Melissa Jimenez said that “Miss Venezuela has evolved and serves to empower women.”
“A woman can inspire others to follow their dreams,” she added. Miss Venezuela, which has been running since 1952, is normally big business in the crisis-wracked Latin American country, but it is suffering from the same difficulties as the rest of the population. One of those is frequent blackouts and a spokeswoman for the pageant last week revealed that the contest did not have enough money to put in place contingency measures in case of a power outage. Several beauty queens sent messages of solidarity to the Venezuelan people. “I wanted to share with you how much love and support I have for all of you in Venezuela right now who are going through a very difficult time,” former Miss Universe Natalie Glebova said.-AFP