The longest river is the Nile (with Kagera), 6671 km. The largest lake is Victoria. The largest island is Madagascar.

Africa is the second largest continent in the world. It is elongated from north to south. The equator divides the continent almost in half, the zero meridian crosses a small western part of the continent. So, Africa is located simultaneously in all four hemispheres of the planet: northern, southern, western and eastern. Most of the continent lies between the tropics, which determines its hot climate.

Africa is washed by the waters of two oceans: from the west and north – the Atlantic, from the east and south – the Indian. South of the equator, Africa narrows and therefore the influence of the oceans is stronger here than in the north.

Africa is close to Eurasia, connected to it by the Isthmus of Suez, and separated from it by the Red Sea. In the north, the Strait of Gibraltar separates the shores of the mainland and the Iberian Peninsula of Eurasia. The extreme points of the continent are:

The coastline is little cut. 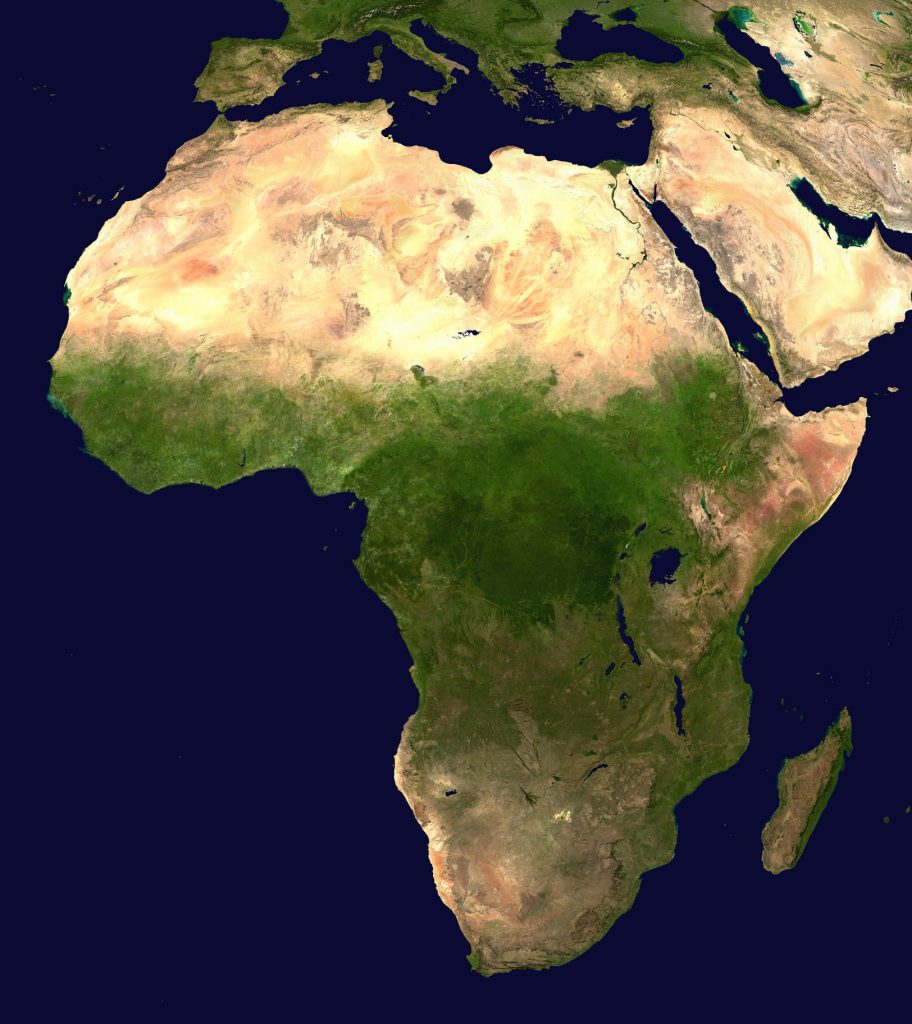 The great seas that wash the shores of Africa are the Mediterranean in the north and the Red in the northeast. The largest gulf is the Gulf of Guinea. The largest peninsula is Somalia. There is only one large mainland island off the coast of Africa – Madagascar. The islands of Madeira, Canary Islands, Cape Verde (Cape Verde), Comoros are of volcanic origin.

The northern part of Africa has been known to Europeans since ancient times. However, its southern and central parts remained unknown for a long time, their development began with the search by the Portuguese for a sea route to India. For the first time, the traveler Vasco da Gama managed to reach India, bypassing Africa, at the end of the 15th century. From that time, the development of the southern and eastern shores of the mainland and the shameful history of the slave trade began.

The study of the interior regions of Africa dates back to the first half of the 19th century. It is connected, first of all, with the name of the English missionary David Livingston. He discovered the source of the Nile, made the first journey along the Zambezi River and discovered the Victoria Falls, first crossed the Kalahari Desert, etc.

A notable contribution to the study of the continent was made by the Englishman Henry Stanley, the Russian Vasyl Junker, and the Ukrainian Yehor Kovalevskyi.

Due to the fact that Africa lies for the most part within the boundaries of the ancient African-Arabian platform, its relief is mostly flat.

According to the prevailing heights, Africa is conditionally divided into two parts: northwestern (Low Africa, where the height is below 1000 m) and southeastern (High Africa, with elevations above 1000 m).

The most elevated plains arose on the shields of the ancient platform – the East African Plateau and the Guinea Highlands. In connection with the exits to the surface of the crystalline foundation, deposits of either igneous rocks (iron ores, diamonds, gold) or sedimentary debris that arose as a result of the destruction of the shield surface (aluminum and manganese ores) were found in these territories.

In many parts of the platform, the foundation buckles, forming depressions filled with a layer of sedimentary rocks. This is how the Chad, Congo and Kalahari basins were formed. Significant deposits of oil, natural gas and phosphorites are confined to the sedimentary cover of the platform. their largest basins are explored in the north of Africa.

The eastern part of the African-Arabian platform is crossed by a system of deep faults – the East African rift. The origin of earthquakes and active volcanoes are connected with its development. Among them is the highest point of the continent – the volcano Kilimanjaro (5895 m). In the northern part of the rift, a mountainous country of magmatic origin – the Ethiopian Highlands – was formed. Deposits of igneous rocks are associated with the fault zone: copper and tin ores, gold.

Fold belts occupy small areas of Africa. The Atlas Mountains are located in the northwest of the continent. Their southern ridges were formed as a result of the collision of the African and Eurasian lithospheric plates in the Hercynian epoch of orogeny of the Paleozoic era, and the northern ridges are of young Alpine age. In the southeast and south of the continent stretched the ancient Dragon and Cape Mountains. They have the appearance of a precipitous wall about 3000 m high, which breaks down to the ocean.

The peculiarities of the African climate were formed as a result of the system of climate-forming factors.

Since Africa lies mostly between the tropics, the Sun is at its zenith above it. This means that the continent receives a large amount of solar radiation, due to a significant angle of incidence of the Sun’s rays. Therefore, Africa is the hottest continent in the world.

The climate of Africa is influenced by constant winds – trade winds, blowing from the tropics to the equator. The southeast trade wind blows from the Indian Ocean, so it brings moist air masses. The northeast trade wind is from Eurasia and causes dry weather.

The south-eastern trade winds are held back by the Dragon and Cape Mountains, which affects the redistribution of precipitation: coastal areas receive a large amount of it, and there is little precipitation behind the mountains. The climate of the coast is significantly affected by sea currents: cold ones cause dry weather, warm ones – moisture. Therefore, the northwestern coast (due to the cold Canary Current), the southwestern (due to the Bengal Current), and the eastern (due to the Somali Current) are not very humid. On the contrary, the western and southeastern coasts are well hydrated due to warm currents (Guinea and Mozambique, respectively).

Africa lies within seven climatic zones. Due to the fact that the equator crosses the continent in half, climatic conditions are mirrored from the equator to the edges of the continent. On the territory of Africa, there are an equatorial climate zone (humid and warm throughout the year), two subequatorial climate zones (warm all year round, but with a summer rainy season and a winter dry season), two tropical (warm with different humidity: continental – with insufficient; marine – with excessive and uniform distribution of precipitation throughout the year) and two subtropical (with wet, warm winter and dry, hot summer).

Depending on the climatic conditions, the surface waters of Africa are unevenly distributed. The rivers of the continent belong to the basins of the Atlantic and Indian oceans. Large areas are occupied by the internal drainage basin.

The largest river of the continent and the second longest river in the world (after the Amazon) is the Nile. It originates from the Kagera River on the East African Plateau. The Nile, passing through several lakes, flows out of them under the name of the White Nile. Near the city of Khartoum, the White Nile receives the waters of the Blue Nile, which originates from Lake Tana in the Ethiopian highlands. From this place and further north, the river is called the Nile. Although the Nile crosses a tropical belt with poor hydration, it is always full of water and flows rhythmically, leaving a layer of fertile silt in the valley. This is explained by the regime of its two largest tributaries, which lie in the subequatorial belt and overflow in summer during the rainy season.

In the equatorial part flows the second longest and the first river in Africa – the Congo. This river has many tributaries and forms the second largest river basin in the world. The river is mainly fed by rain, it crosses the equator twice, so the Congo is full of water throughout the year.

The Niger and Zambezi rivers of the subequatorial zone belong to the largest rivers in Africa. They are rain-fed and have a distinct change in the water level in the river throughout the year: a summer flood and a winter low. The widest waterfall in the world – Victoria – was formed on the Zambezi River. The water falls from a ledge 1800 m wide from a height of 120 m.

The rivers of the tropical belt are shallow with predominant soil nutrition. These include, in particular, Orange and Okavango. There is a lot of water in the Sahara – dry riverbeds where water appears once every few years. 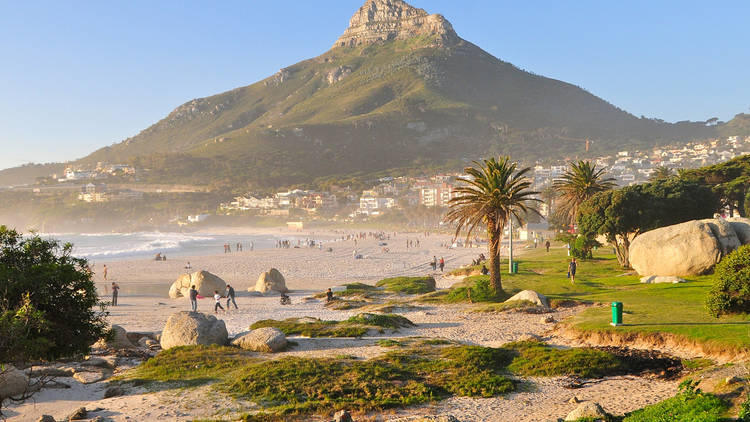 Most of Africa’s lakes are located in faults-grabens of the Earth’s crust along the East African Rift. Therefore, they have the tectonic origin of basins. These include, in particular, Victoria, Tanganyika and Nyasa. In the northern part of the mainland is Lake Chad of relict origin. Lake Tana in the Ethiopian highlands was formed as a result of the Blue Nile being blocked by lava flows, that is, it has a poisonous origin.

Artesian basins have formed under large expanses of deserts, the largest of them – under the Sahara.

The latitudinal zonation of natural zones is clearly visible on the plains of the mainland. Natural zones repeat from the equator to the north and south.

In the Congo basin and on the coast of the Gulf of Guinea, a natural zone of humid equatorial forests (hylea) was formed. In the conditions of a humid and warm equatorial climate, red-yellow feralite pounds were formed. Evergreen multi-tiered forests grow on them. Among the trees, palm trees, ficuses, coffee, bread, yellow, red, black, iron trees, cocoa tree, tree-like herbaceous plant – banana are known. Many vines. There is no grass due to lack of light. Animals live mainly on trees. Many monkeys: gorillas, chimpanzees, monkeys. Among the mammals there are leopards, pygmy hippos, okapi, cat-eared pig. Among the birds, parrots and nectarines are known.

40% of the mainland is covered by savannas and deciduous forests. They formed on the East African Plateau, in the Chad Basin and the Kalahari in a subequatorial climate. The climate is characterized by a dry season and a rainy season. Therefore, plants are adapted to the transfer of the dry season: they shed leaves, they are covered with wax or downy, turn the leaves with the edge to the sun (umbrella acacia), accumulate moisture in the trunk (baobab) or in the leaves (aloe, agave) during the rainy season. Among the plants, grasses prevail. Trees are scattered in small groves. Many large animals live in the open spaces of the savannah: African elephant, giraffe, hippopotamus, rhinoceros, zebra, antelope, gazelle. The lion predominates among predators. leopard, cheetah, hyenas, jackals and vultures. Among the birds, the large flightless African ostrich, the secretary bird, and the marabou are known. A lot of termites, ants, flies this-this.